Requirements: 2.2 and up
Overview: What is there to fear? We are Spartans! For the glory of Sparta! 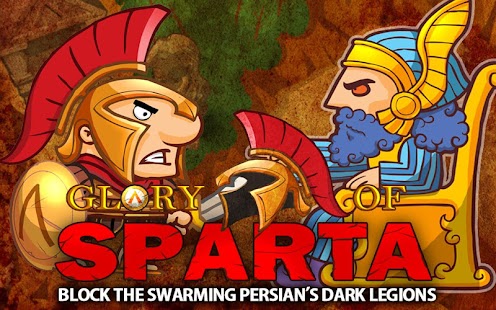 “☆Speech by the king of Sparta!
The tyrannical king of Persia, Xerxes, has amassed his dark legions against Greece! It is our solemn duty to defend Greece and dispatch his minions to Hades. We will make our stand at Thermopylae, where we will engrave in eternity the bravery and name of SPARTA!
☆Features
30 levels
13 Spartan types (4 historic hero characters)
30 Persian types
12 skills (12 active, 4 passive)
RPG style level-up system
Fantasy history game
Automatic hack & slash
Combination of strategy + defense
Establishment of your own camp with strategic flags
☆Meet historic heroes!
Hero Agesilaus
- King who tried to free many Greek cities from the clutches of Persia. He shoots arrows with powerful fire.
Hero Gylippus
- General who thwarted the Athenian plan to conquer Sicily. He has the ability to heal heroes and soldiers around him.
Hero Brasidas
- Hero of the Peloponnesian War who is compared to Hercules in the Symposium by Plato. Using his tremendous Health as a weapon, he provokes enemies to attack him.
Hero Pausanias
- Spartan supreme commander for the allied powers that destroyed the Persian military. With powerful attacks and health, he significantly increases the attack power of allies by raising their morale.”

What’s New
★1.0.2 Updates★
- Improved other environments and fixed minor bugs
We are also doing our best to provide smooth gameplay and other improvements.
This game has no advertisements
Download Instructions:
http://ul.to/0nca6f9g
Mirror:
http://www.tusfiles.net/bdwnf7ibidro
http://hugefiles.net/iml0igscbilt
http://www67.zippyshare.com/v/46057996/file.html