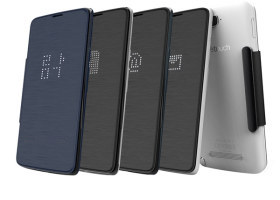 The Hero has captured the essence of the Note – a large, 1080p screen, a stylus to go with it and split-screen multitasking to boost productivity. The screen is actually bigger – 6 inches – and the bezels are impressively thin.

That said, Alcatel kept its feet on the ground and went for a Cortex-A7-based MediaTek chipset. The amount of inbuilt storage is economical but expandable and there’s a dual-SIM version right out of the gate. This keeps the price in check and makes the phablet suitable for emerging markets (where the lack of LTE isn’t a huge deal).

There’s a place for the Alcatel One Touch Hero in established markets too – we’re seeing a shift towards affordable, capable devices in the mobile world with devices like the Moto G and $200 tablets.

Alcatel One Touch Hero in our office

The One Touch Hero has the build quality wouldn’t be out of place in the lineup of better known makers and Alcatel did well to avoid gimmicky tweaks. Where the company stepped outside the box is the attachable accessories, while split-screen multitasking and especially the stylus are right out of the Note rulebook.