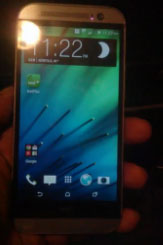 Sadly, there’s still no information on how those cameras work. The uploader of the video shows that the phone packs 32GB of internal storage and suggests 16GB and 64GB models will also be available.

The HTC One 2014 in the video is the silver model, but thanks to leaks from evleaks we know there’s also a grey and gold coming up.

The smartphone is tipped to sport a 5-inch 1080p flagship with a Snapdragon 800 CPU ticking inside and runs Android 4.4.2 KitKat. The most notable addition, of course, is the dual-camera, dual-LED setup on the back.

The All New HTC One will be revealed at the end of this month, on March 25. We will be covering the event live, so be sure to tune in for the full scoop.

To watch the actual video, head over to the source link below.