The Nokia X is already available in some places but the odd phone – an Android-powered Nokia – is still a bit of a novelty. The team at Zing.vn got their hands on one unit days before the phones launch in Vietnam and posted an extensive photo session. 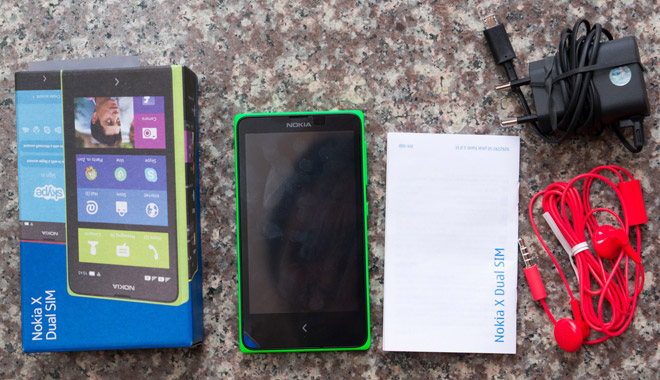 Despite forgoing the Play Store for a Nokia-centric app store (plus third party stores), the Nokia X has a great app package out of the gate.

There are browsers (Opera), social networking apps (Twitter, Vine), file managers (Astro) and plenty of games. And that’s just what you can see in the photos, for a longer list of apps that are available on the Nokia X, check out our blog post comparing the Nokia Store to the Play Store.

The Nokia X has a rich app package

The UI is a mix between Windows Phone (the tile-based homescreen), Android (the notification area with toggles) and Asha (the Fastlane UI).

The camera on the Nokia X is fairly unimpressive, shooting 3MP stills and 480p video.

The phone itself borrows the design of the Nokia Asha 50x line with a single back button below the screen.

Asha looks for the Nokia X

The Nokia X has a dual-SIM option – the card slots (including a memory expansion slot) are below the back cover. The colorful covers can be exchanged to customize the looks of the phone.

For more details on the Nokia X, check out our hands-on from the MWC.