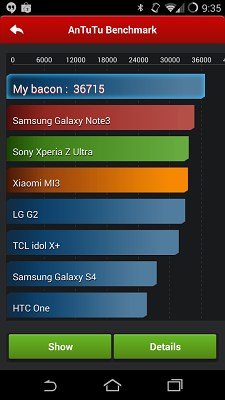 The upcoming OnePlus One droid has made yet another appearance before its official announcement, paying the Antutu benchmark a visit. The most prominent member of the Cyanogen Mod team, the guys behind the handset’s ROM, shared a screenshots with its performance in the popular benchmark.

Even though the name of the device wasn’t explicitly confirmed, that fact the post was reshared by the official OnePlus account tells you everything there is to know here.

So now that we know what the device is, let’s focus on the score. 36,715 points is an excellent achievement, topping the Galaxy Note 3’s result even though the two handset share the same chipset – Snapdragon 800. Obviously the CM ROM is somewhat lighter than TouchWiz and leaves some extra processing power at the user’s disposal.

As previously confirmed, the OnePlus One will go on sale in its first 10 markets in Q2 (which starts in less than a month). The pricing is confirmed to be below $400, but that’s probably before local taxes are applied.