How do you compare phones that are so different – the LG G3 and HTC One (M8) barely have a common feature between them. As we found out though, even different specs can create a similar user experience, it’s more than just a numbers game. 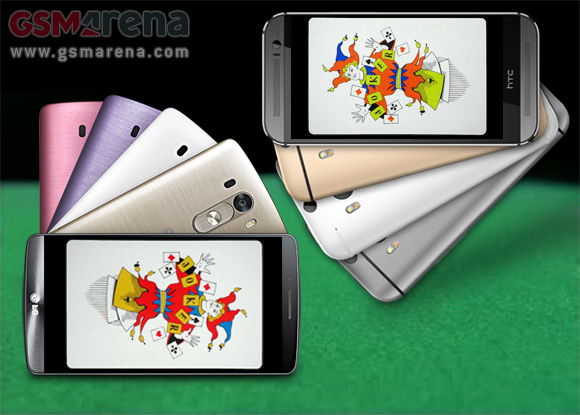 Going into this article we had a certain idea of how things will work out but a series of tests once again proved that specs rarely tell the whole story. The 5.5″ QHD screen should handily beat the 5″ 1080p screen, right? And the contest between a 3,000mAh battery and a 2,600mAh one should be fairly straightforward.

It should but the LG G3 proved less dominant than it sounds on paper. The HTC One (M8) on the other hand, still has downsides it found hard to overcome. Here’s a quick blow by blow of where each phone dominates its opponent.

The LG G3 is a budding illusionist. It looks deceptively small, almost the same size as its opponent despite having a 20% larger screen. The back looks, and to a certain extent feels, like metal, but is actually a specially coated plastic. The screen, of course, is the first QHD unit (1,440 x 2,560 pixels) from a major manufacturer.

The HTC One (M8) has a true metal unibody – it’s difficult to tell by looks, but touch is a dead giveaway. HTC focused on the experience, a lot of which comes from software features including a revamped Zoe backed by a new dual camera and improved stereo speakers on the front.

UX has become one of the 21st century buzzwords yet a lot of it comes from the past, our preconceptions. This means users will scoff at the plastic “metal” of the LG G3 even if they won’t notice it until you tell them.

It’s a matter of how well each company managed to read their consumers – the 4MP camera of the One (M8) stands little chance against the muscled up 13MP shooter of the LG G3, but a 5MP selfie camera is a perfect match for the social networks that rule the day, same goes for the effect-laden Zoe.

So, proceed with an open mind to the next page to see if HTC’s traditional strength – design – has been countered by LG’s newfound creativity.