HTC One (M8) gets GPS fixing update in Europe 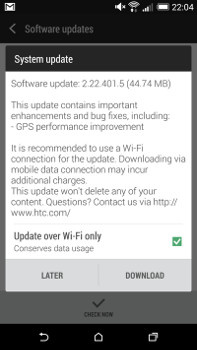 The HTC One (M8) has started receiving a small (and minor) software update in Europe.

The update is currently in the process of rolling out over-the-air, so your phone should notify you once it’s available for it to download and install – which you can then do on the handset itself, without the need to use a computer.

According to HTC’s notes, the update comes with “important enhancements and bug fixes”, including a “GPS performance improvement” that isn’t detailed any further unfortunately.

Still, it’s probably safe to assume that, if you’ve been having issues with the GPS on your One (M8), you should install this update as soon as you can.

After doing so, you’ll be running software version 2.22.401.5. The Android version will remain unchanged. The update comes in at around 44MB, so it’s not that big.

As always in such cases, do keep in mind that OTA rollouts can take a while to reach all the devices out there, so if you haven’t received the notification yet, it will probably arrive within the next few days or weeks.