Huawei to hold a press conference on September 4 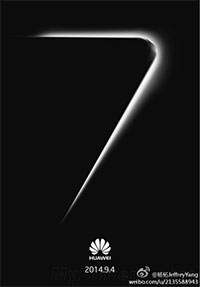 Huawei has just sent out press invites for a September 4 event, just a day before IFA 2014 kicks off. The company’s invite hints the number 7, leaving us to expect either the Ascend Mate 7 or the Ascend D7.

The phone’s name isn’t known yet, but it is rumored Huawei is preparing to launch a 6″ device with a QHD resolution. It’s going to be utilize the company’s Kirin 920 chipset, 3GB of RAM and a Mali T628MP4 GPU.

At the back, the phone carries a 13MP camera, while selfies are handled by a 5MP front-facing snapper.

We’ll know for sure what the company has in store for us on September 4. Make sure to tune in as we’ll have a ton of live coverage of what’s happening at IFA 2014.