in Uncategorized / by apkmaniax /

The upcoming Motorola Moto X+1 has gone through the GFXBenchmark test, which has confirmed its key specifications. The Moto X was criticized for not having flagship specifications, but it appears its successor will be a full-blown powerhouse. 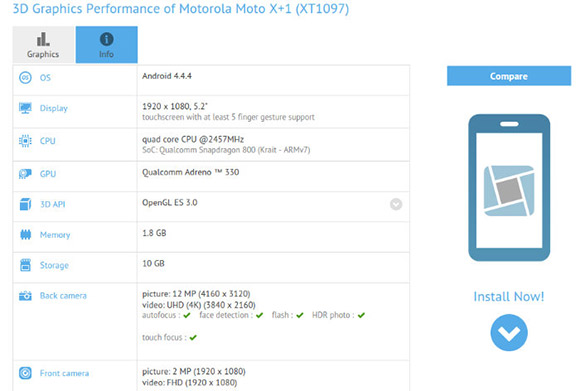 Internal memory is reported as just 10GB, which could be the available space left from the original 16GB. The Moto X and Moto G lacked microSD card slot, but since Motorola fixed its act with the more affordable of the duo we hope it will take proper care of its new flagship too.

The display of the Moto X+1 is a 5.2″ with a full HD resolution. This is by far the largest smartphone Motorola has ever made and it’ll be interesting to see how it’ll handle. The company made a great impression for making its recent phones feel good in hand.

At the back, there’s a 13MP snapper that is capable of recording 4K video, while at the front is a 2MP camera recording 1080p video.

The Motorola Moto X+1 will be announced alongside the Moto 360, Moto G2 (or perhaps Moto G+1) and a new Bluetooth headset on September 4 in Chicago at a dedicated press event.