Nvidia has officially released the 64-bit version of its Tegra K1 system-on-a-chip. The chipset is also known as Denver and is anticipated to be the company’s first 64-bit one to have Android running on it. 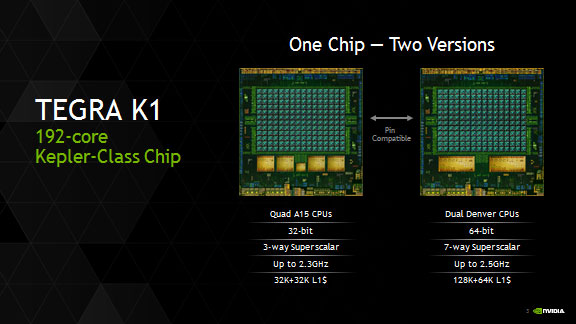 The 64-bit Tegra K1 is comprised of dual cutom Denver CPU cores, which are capable of running slightly faster than the 32-bit K1 – 2.5GHz versus 2.3GHz. The 192-core Kepler GPU is promised to rival PC performance, but more likely we’re talking last-gen consoles. This is not less impressive, however.

Nvidia has revealed that the 32-bit and 64-bit versions of the Tegra K1 are pin compatible, which means faster release and ease of implementation. The Denver CPU shapes up to be a beast with its custom 7-way Superscalar microarchitecture, which means up to 7 concurrent micro operations can be executed per clock.

All of these technicalities are going to manifest in “amazing” devices as per the company’s blog post. They’re going to launch later this year and all of them will have no problem running Android L as Nvidia is currently working to implement it.

The HTC Volantis, Google’s upcoming 8.9″ Nexus tablet, is rumored to be among the first to run on the 64-bit Tegra K1 platform.