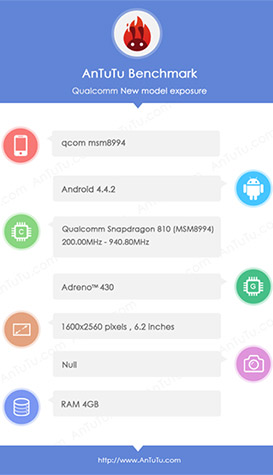 Qualcomm announced its 64-bit Snapdragon 810 chipset back in April and thanks to a listing in the AnTuTu benchmark database, we can see it is currently undergoing testing.

The platform has been placed into a prototype device with a 6.2″ 2560×1600 pixel resolution screen and 4GB of RAM. Interestingly, the frequency of the CPU is detected in the 200-940MHz range. At its maximum, it can operate at 2GHz.

Sadly, there’s no information on how much performance the Snapdragon 810 chipset gives out. We hope the benchmark results gets posted eventually.

There have been rumors that the Nexus 6 could feature the 64-bit Snapdragon 810 chipset but nothing confirming this information has popped up.

It’ll be interesting to see how the Snapdragon 810 will stack up against the Nvidia Tegra K1 (Denver), but we’ll have to wait until this fall to find out.