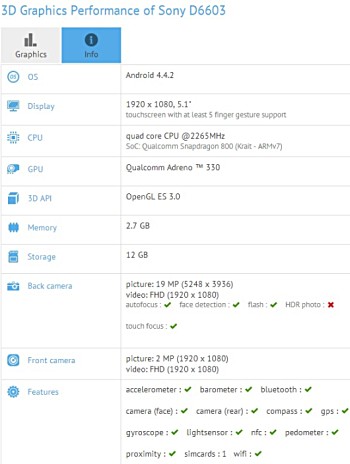 The Xperia Z3 is no stranger to our homepage, it’s been the subject of several leaks already. It’s certain that Sony will present it in the beginning of September as they traditionally unveil their latest flagship at the annual IFA expo.

Today’s leak however gives us a glimpse at the internals of the Sony D6603, or the Xperia Z3, as its common name goes.

The GFXBench benchmark database has an entry showing not only the score the device achieved, but also the hardware used.

To cut the long story short, the Xperia Z3 seems to have the same hardware as the Xperia Z2 – starting from the 5.1-inch 1080p screen, moving through the Snapdragon 801 chipset with 3GB RAM, down to the 20MP camera on the back.

What remains to be seen is what possible feature would Sony use to differentiate its new flaghsip.

Of course, we are yet to learn more about the new compact phone in the Z series – whether it’s Z2 Compact or Z3 Compact. That’s another phone expected to make an appearance at IFA 2014 Berlin.