A Samsung Galaxy Note III teaser with a rendered image of the device has been posted on Spigen’s website. Spigen, in case you haven’t heard the name, is a company that manufactures cases for a huge variety of smartphones.

So, out of the blue Spigen has published a teaser image of the upcoming Galaxy Note III phablet that is going to be unveiled on September 4. The render definitely looks plausible and while there’s no way to know if it’s the real deal, it probably bears quite a lot of resemblance to the final product. 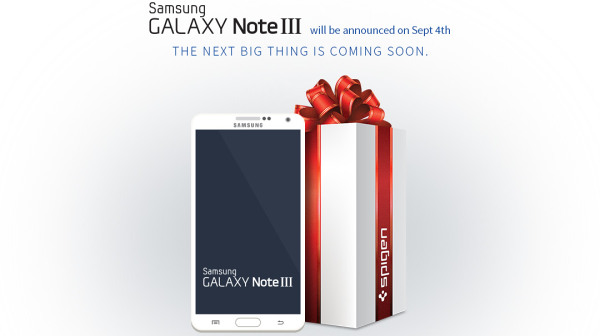 The Galaxy Note III is rumored to pack a 5.7″ 1080p Super AMOLED display and run on Snapdragon 800 or Exynos 5420 chipset depending on your region. It will offer 3GB of RAM, a 13MP sharpshooter, expandable 16/32/64GB storage and LTE connectivity. A huge 3200 mAh battery will power the monster and, naturally, you can expect an integrated S-Pen.

The third generation Samsung Galaxy Note will go official next month, on September 4 in Berlin. We will be live at the unveiling, so be sure to tune in for the full scoop on the phablet.