It’s the first time we have an Archos smartphone for review here at GSMArena but it isn’t the first time we hear the French maker’s name. For years now Archos has been churning out tablets with good specs for a reasonable price. They make phones too and you can find them subsidized by carriers in many countries.

The Archos 50 Diamond is the company’s flagship phone at the helm of its portfolio. Its highlights include the 5″ 1080p IPS LCD on the front, the 16MP camera on the back and the 64-bit Snapdragon 615 chipset and 2GB of RAM inside. The 50 Diamond also boasts dual SIM abilities out of the box without compromising its microSD card slot. 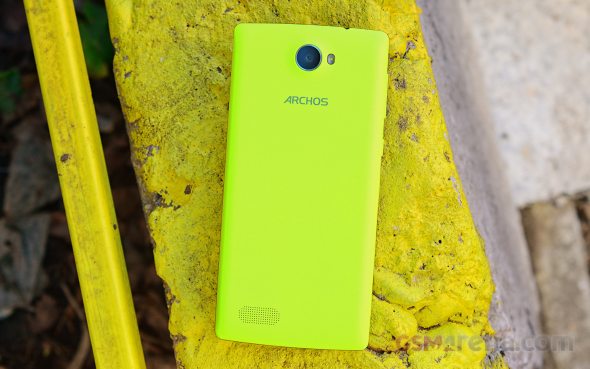 Together the main specs round off a reasonable upper midrange handset that can challenge competition from Samsung, HTC and China for the hard-earned cash of buyers. Perhaps one of the more important aspects of the Archos 50 Diamond is that it runs vanilla Android 4.4.4 KitKat out of the box catering to Google-purists that would otherwise cringe at yet another Android skin that contradicts Google’s design aesthetic.

The Archos 50 Diamond review unit we received is the flamboyant lime-colored unit but there is a more subdued black variant as well. The popping color could sway the younger audience and maybe some die-hard Borussia Dortmund fans too (if soccer is your thing to begin with).

Archos is aiming the 50 Diamond as a capable device that could be easily associated with Google’s Android more than with Archos – hence the choice of UI. You’re most likely to find the device on specific retailer’s shelves or mostly on your carrier’s website.

While not a rival to the high-end smartphones of 2015, the Archos 50 Diamond looks to be a perfectly capable upper-midranger. At around € 250 at the moment it’s also an affordable phone that would be good for multimedia consumption thanks to its good chipset, ample and high-res screen and ample storage due to the microSD expansion. It’s also a good phone for users with the need for dual SIM and also LTE connectivity for a reasonable price.

The 16MP camera also sounds promising and packs 1080p video recording – which is still more than fine to have.

So stay around as we delve into the hardware prowess of the Archos 50 Diamond.

The Archos 50 Diamond comes packed with a microUSB cable, headphones with volume control and microphone and an A/C adapter rated at 1A.

Archos has gone with a simple yet elegant design for the 50 Diamond. The front offers a clean and flat design accented by a small chin at the bottom that carries over the color of the wrap-around back panel. There are no on-screen buttons – those are replaced by capacitive touch buttons for home, back and menu under the screen. The buttons light up ever so slightly and mostly stay out of the way. The screen blends in with the rest of the black front resulting in a very clean, incognito look.

The Archos 50 Diamond is a little taller than its 5″ screen diagonal might suggest. It measures 146 x 70.4 but it’s reasonably thin at 8 mm. The weight is acceptable at 142g rounding off a balanced frame that’s not too heavy nor too big.

The back is much less flat. There are curves for the sides and also the camera hump. You can get the Archos 50 Diamond in black but our unit sports a fresh yellow paintjob that turns outright electric under certain lighting conditions.

The back panel remains clean in its design. Aside from the camera hump and LED flash there’s only a subtle back-facing speaker grille that sits in the bottom corner and completes the design package.

The sides of the Archos 50 Diamond are flat but have a slight bevel were they meet the back. There’s also a very subtle curve to the top and bottom of the phone making it appear a little tilted under certain angles.

The front of the Archos 50 Diamond hosts a 5″ IPS LCD of 1920 x 1080px resolution, 8MP front-facing camera, earpiece and three capacitive touch buttons under the display for home, back and menu. Holding down the home button prompts up Google Now while a double tap will open up the task switcher interface.

There is no option in the software to add on-screen buttons to the Archos 50 Diamond.

There’s a power button and volume rocker on the left side of the 50 Diamond and only the slit to take off the back panel on the right side.

The 16MP camera lens protrudes a bit on the back’s upper side. Next to it there’s a single LED flash. The single speaker is on the bottom left under a grille. There are two miniscule nobs on either side of the speaker that ensure it won’t get muffled when the phone is lying on its back.

Undoing the back panel reveals the non-replaceable 2,700 mAh battery, the two microSIM slots and the microSD card slot. You can see the NFC antenna glued to the back cover.

The rounded sides and back panel feel very comfortable in the hand and the whole phone slides through the palm and fingers. However fans of square, sharp phones will have to make adjustments here.

The display on the Archos 50 Diamond is a 5″ IPS LCD with a resolution of 1920 x 1080px and a resulting pixel density of 440 ppi. That’s plenty sharp on paper and also in practice – everything from icons to text is rendered pixel-sharp and is very pleasing to the eye. 2.5K displays on recent smartphones are a bit sharper but 1080p is certainly good enough. 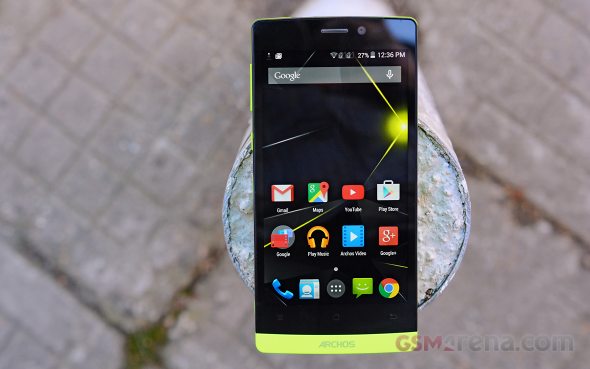 Under a microscope the pixel arrangement can be seen. It’s a standard RGB one with equal in size and number red, green and blue pixels that make up the display. 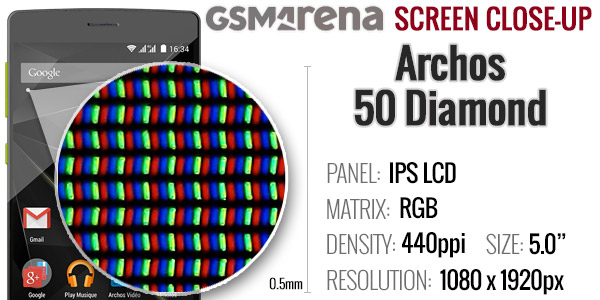 Looking at the numbers from our dedicated display test we can see very good contrast and good brightness levels from the Archos 50 Diamond. Compared to its peers the 50 Diamond also offers deeper blacks.

Sunlight legibility determines the contrast of the display under sunlight and also the level of reflectivity. The Archos 50 Diamond posts a middling result which is nonetheless above average for a midrange smartphone.

The non-removable 2,700mAh battery of the Archos 50 Diamond was above average in our tests. It managed a 60 hour endurance rating with average browsing, above average video playback and superb talk time endurance.

In our dedicated standby test the Archos 50 Diamond endured around 340h with a single SIM inside and 240h with both SIM slots occupied – both good numbers. Note that the endurance rating below features the stand-by with two SIM cards. If we were to factor in the single SIM standby performance, the endurance rating would rise to 64h. 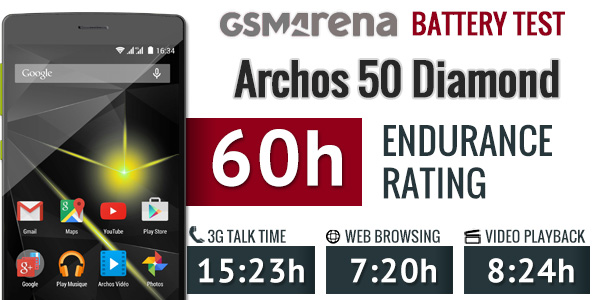 It comes dual-SIM, dual-standby functionality by default – 3G and LTE are supported only on SIM1, while SIM2 can tap into 2G GSM networks only.

The 50 Diamond has Wi-Fi with Direct functionality but interestingly can’t see any 5GHz networks, leading us to believe it’s a single-band radio. Bluetooth 4.0 is also on board with A2DP support.

The microUSB 2.0 port supports USB host so you can attach USB flash drives or connect peripherals.

You can also stream your display via the Wireless Display feature (Miracast).

Just as expected, GPS support is also available, but not the GLONASS variety.

There’s also FM Radio and NFC but no IR port and no way to get wired TV Out functionality either.