Asus announced the European expansion of its Zenfone 2 lineup on March 30 at a special press event held in Paris. The spotlight was shared between the Zenfone 2 lineup, its new accessories, the Transformer Book Chi hybrids and the latest ZenBooks.

The Zenfone 2 was announced earlier this year at CES, but Asus is now determined to push across the European market. The first country to get the Zenfone 2 series is France. There the different sub-models are already available for purchase and Asus is offering some nice perks such as a tempting return and refund policy in case you are not satisfied with you Zenfone 2. 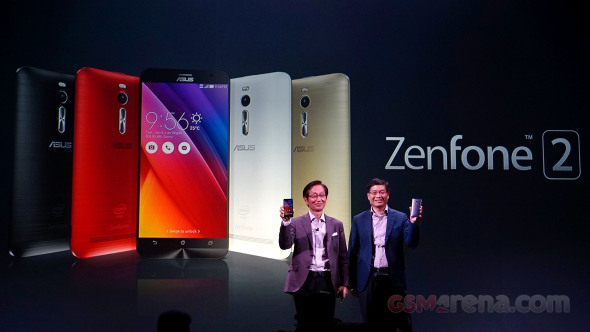 Asus Transformer Book Chi T100 and T300 are also available for purchase. The two hybrids are quite attractive because of the detachable keyboards, powerful processors, the adequate on-board storage, and the affordable prices.

The latest Asus ZenBook laptops are already making their way on to the market with some impressively slimmed down bodies stuffed with powerful hardware.

Want to know more? We continue just after the break.

Asus has finally released the Zenfone 2 across Europe. After already having sold 10 million Zenfones, mostly in Asia (but also Brazil), and reaching sales levels of 1.5 million units per month, Asus thinks Europeans will be interested in the Zenfone 2 range as well. All three Zenfone 2 models are up for grabs in France as of March 31. While we can assume more European countries will follow soon, Asus hasn’t said anything specific yet.

Asus Zenfone 2 ZE551ML has a cheaper flavor with the less capable yet very powerful Intel Atom Z3560 chip, which features a quad-core 1.8GHz processor, PowerVR G6430 GPU and 2 gigs of RAM. The rest of the hardware is the same.

The 5.5″ display is impressively sharp at 403ppi and is protected by a sturdy piece of Corning Gorilla Glass 3. Unfortunately, our impression from the time spent with it is that it doesn’t seem as bright as today’s crop of flagships and it performs rather unimpressive under sunlight.

Asus surely borrowed some inspiration from LG G2 and G3’s highlight feature – the rear control deck. The Zenfone 2 features a button on the back, positioned in the middle, right below the camera and its dual-LED flash. Interestingly, the company decided to keep the Power button on top (it’s very hard to reach the top of the tall device).

The basic model of the Zenfone 2 ZE551ML comes with a brushed metal finish, which is available in a wide range of colors. Asus also offers some intriguing in-house-designed accessories – the View Flip Cover Deluxe (€40) and the standard View Flip Cover (€30). Those are also inspired by the LG G3’s original cover.

Both flip covers do the same thing – notifications at a glance, the Deluxe version is just more…well, premium and thus costs more.

More interesting are the Transfusion and Illusion series, which puts a unique rear cover on the Zenfone 2. The first breaks up the monotony with a color gradient instead of a solid color, while the latter goes even further with unique 3D patterns. Opting for one of these series will bump the base price, of course.

Speaking of the pricing, the Zenfone 2 costs €349 in France, but as of now it is sold exclusively at €299. And if you don’t like the phone within the first two weeks of your purchase – you’ll get your money back after returning the phone.

Asus installed a 13MP shooter on the Zenfone 2 ZE551ML with a fast f/2.0 aperture and software enhancements to improve low-light and HDR shots. This camera records 1080p video. On the front is a selfie-friendly 5MP camera with an 85° lens, which can be expanded to a virtual 140° with the Selfie Panorama mode.

Here is a blast from the past – Asus resurrects the external flash for phones! The Asus Zenflash adds a xenon flash on the back on your phone, while the Lolliflash grants you a powerful dual-LED dual-color flash. The latter comes with three multi-color filters if you want to add further drama to your images.

The Asus Zenfone 2 ZE550ML has the same screen size as the flagship model, but the resolution is just 720p, and the chipset is different too – in this case an Intel Atom Z3560 with a 1.8 GHz quad-core CPU, PowerVR G6430 and 2GB of RAM. This model comes with 16GB of expandable storage, and costs €249.

The phone looks a lot like the flagship ZE551ML model, but lacks the premium editions, which enhance the rear panel with different colors and textures.

Asus Zenfone 2 ZE550ML rear cover is made of plastic, but you can’t tell it at first, which means Asus did a good job with the choice of material and texture pattern.

While it does have LTE support, the ZE500CL tops out at Cat.3, which means theoretical peak download speeds of up to 100Mbps, whereas the 5.5-inch versions both enjoy Cat.4 LTE, going up to 150Mbps.

It looks a lot like the 5.5″ Zenfone 2 with the HD display, but its screen bezels aren’t as impressive as on the bigger models. It has the same rear controls and plastic rear cover as the Zenfone 2 ZE550ML.