A few weeks ago we brought you images and video showing what an early build of Android L for theSamsung Galaxy S5 looked like.

Since that point, the Korean company’s engineers have been hard at work tweaking things and integrating the TouchWiz UI with the new version of Android. And today it’s the turn of a newer build of Android 5.0 for the Galaxy S5 to get showcased in all its glory. 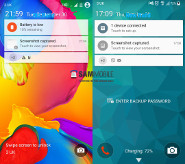 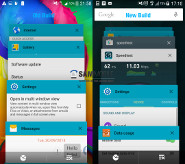 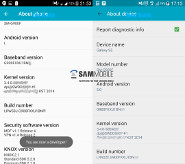 Samsung has refined many design bits, as you can see in the first two screenshots above. The device information page still doesn’t say the word Lollipop, but the Android version is now listed as 5.0, instead of the “L” we saw last time.

The new leaked build has mostly UI enhancements compared to the old one. A fingerprint lock screen like the one in the Galaxy Note 4 is present, there’s a new system font, new animations, a Google Search bar in the Recents menu, the brightness slider in the notification area has a new color, “Interruptions” has been removed from Sound settings, the Gallery has new filters, Contacts has a new search box, and stock apps with Material Design get the colored status bar.

The green elements in Google’s Lollipop theme have been replaced with Samsung’s blue, Settings has new icons, there’s a new UI for setting the wallpaper, and better spacing between items in the power off dialog. The Music, Clock, and Calculator apps all come with improved designs now too.

Clearly Samsung Galaxy S5 owners across the world are eagerly awaiting this update, and it definitely looks like it’s progressing nicely. Android 5.0 Lollipop might hit the Galaxy S5 before the end of this year, according to past mumblings.