in Brain & Puzzle, games / by apkmaniax / 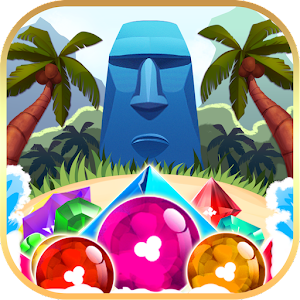 Category: Brain & Puzzle
v1.0 update:
Overview:
Lost Island Adventure is an addictive and unique match3 swiping game. It has stunninggraphics, awesome music and some really engaging game modes! It can best be summed up as an exciting match-3 adventure game.
You play the part of Dr Spagbol, a revered entomologist, who is travelling with a team of scientists to explore an island, that after some recent volcanic activity has risen from the sea. As you approach the island, your plane encounters a very heavy squall which comes out of nowhere. The pilot struggles to keep control of the plane, but it is to no avail. The plane spirals out of control and crashes close to the shore of the island. Miraculously the team survive the crash and escape from the plane, swimming towards the shore. And so your adventure begins …
SINKING FEELING
Having survived the crash, you and your team clamber out of the plane wreckage and swim for the shore. After a short swim, you reach the beach and stagger to your feet, letting out a cry of joy! Unfortunately it was short lived as you start to feel your feet sinking beneath you. QUICK SAND!
MONSTER MAYHEM
A map has led you towards a cave which is the entrance to a lost valley containing untold riches. Unfortunately there are many monsters and strange creatures lurking within the cave. The only way you will get to the fabled valley is to defeat all of the monsters.
TOMB RAIDER
Scavenging through the jungle you stumble upon a clearing containing the entrance to five tombs. Each tomb is protected by a guardian. Scattered all over the ground are many coloured gems, corresponding to the colour of the guardians. Swipe the gems to return them to the guardians, thereby opening the tombs to the treasures that lay beyond.
FRUIT CAPERS (deluxe only)
Jack, the team’s mischievous pet monkey, has escaped from the camp with the only map. You track him down to a small island in the middle of a crocodile infested lake.You need to get Jack and the map back and the best way is to entice him off the island is with lots of fruit!
From the developers who brought you the incredibly popular gem matching game ’Gem Collapse’!
☆ NO In-App Purchase (IAP) whatsoever.
DELUXE VERSION FEATURES
(You are looking at the deluxe version)
☆ NO ADS!
☆ Extra bonus mini game, ‘Fruit Capers’.
☆ Zen mode; relax, chill and play without the timer in all the game modes.
☆ More monsters to fight in Monster Mayhem.
☆ Good karma for supporting an Indie developer!
Note: any game save from playing the free version can be used in the paid version.
ALL VERSION FEATURES
☆ Extremely addictive match-3 puzzle game play with the excitement of an adventure game.
☆ Stunning graphics, fully optmised for small, medium, large and extra large screens.
☆ Uniquely different mini-games; ’Sinking Feeling’, ‘Monster Mayhem’, ’Tomb Raider’ and ‘Fruit Capers’ (deluxe only).
☆ Each mini-game is easy to learn, yet hard to master. Monster Mayhem is a real challenge which will require your wits and a well planned strategy!
☆ Lots of awesome power ups.
☆ Progress is saved in every mini-game – try out the different games without losing your saves.
☆ Use Amazon cloud backup to play on all your mobile devices without losing your progress. Game saves work across iPhones, iPads, Android devices and Kindles. 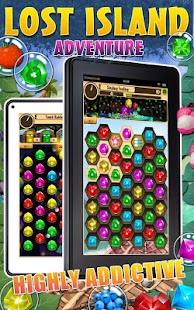 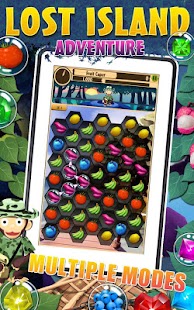