Requirements: 2.2+
Overview: A jumping game of epic proportions!
Get ready to blast off on an epic jumping journey with Mega Jump! 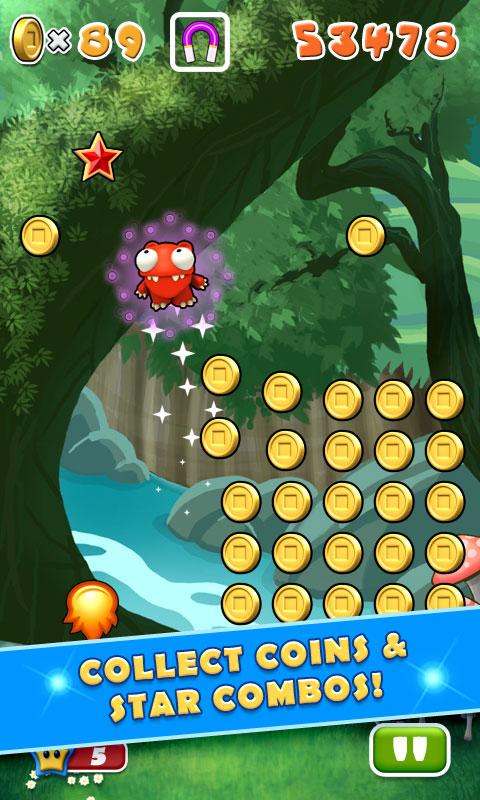 Collect coins, grab crazy powerups, and evade monsters to boost yourself to the edge of the Universe and beyond!
Known Issues:
Some users are seeing crashes or freezing on the Samsung Galaxy SII. The crashes seem to be related to multi-tasking. Having less running in the background seems to help this issue. We are working hard on a better fix!
Mega Jump has got what you need:
★ Eye-popping cartoon graphics and beautiful multi-layered backdrops
★ Grab the Fireball and Super Nova Mega Boosts and hang on for a fiery ride!
★ Collect coins and stars for big points and huge combo boosts!
★ Turn into a Balloon! Strap on some Jump Boots! Become a Coin Magnet! Hover with the Action Umbrella or zap enemies with the Power Shield!
★ Multiple stages – try to reach the edge of space and beyond!
★ Reached the final stage? Try the Hard stages for an extra challenge!
★ Watch out for killer items and monsters that’ll stop you dead in your tracks!
★ Unlock all kinds of awesome new characters to play with!
★ Hilarious sound effects and a bumping sound track!
★ Regular updates with new features and upgrades!
★ Dozens of unlockable achievements for maximum gamerscore!
★ Online worldwide leaderboards with Feint!
★ Compete with your friends on Facebook and Twitter!
What are you waiting for? Grab Mega Jump and start jumping!
“Superb” – Slide to Play
“Incredibly addictive” – Gamezebo
“You’ll be amazed with how long you’re going to be playing!” – Appmodo
Honors:
Mega Jump has over 22 million players and counting! Thanks to all the Mega Jumpers out there!
What’s in this version:
In This Update:
A Brand-New World – Magica!
- Play 20 all-new stages with over 50 new coin patterns!
Bug Fixes Galore!
- Less Crashing!
- Faster Loading!
- Better Performance!
Graphic Updates!
- Better Looking Characters!
Thanks for being one of the over 40 Million Mega Jump players! You’re the best fans in the world!
Download Instructions: Credits: Stranger97
http://uploaded.net/file/iprf2zb0
Mirror:
http://clz.to/9i4mw5ge
http://rapidgator.net/file/d3a88215a…64f0b577ae4b2/
APK
Share this article :
Label: ARCADE, GAME, TOUCHSCREEN
« Prev Movie Next Post » Home