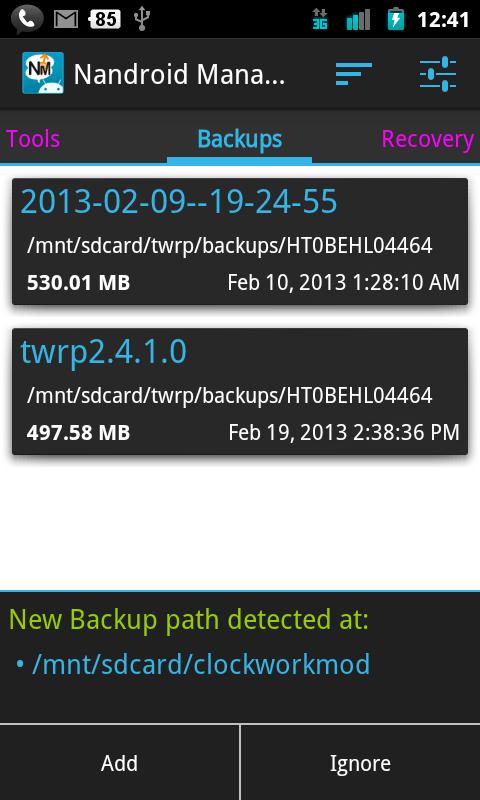 With Nandroid Manager you can restore data from your nandroid such as apps+data, text messages, call logs, and much more!
Also with Nandroid Manager not only can you restore data from your nandroid backups but you can also flash new recoveries and use tools like fix permissions.
Nandroid Manager currently supports nandroid backups created by TWRP and Clockworkmod (v5.xx and v6.xx) based recoveries!
THIS APP REQUIRES THAT YOUR DEVICE IS ROOTED AND YOU HAVE BUSYBOX INSTALLED!
Current Features:
* View basic info about your nandroid backups.
* Explore contents of nandroid backup.
* Extract files from nandroid backups.
* Support for yaffs2.
* Rename backup.
* Compress backup to zip.
* Delete backup.
* Verify and regenerate MD5 hashes for backups.
* Restore Apps+Data from backup.
* Restore Text Messages from backup.
* Restore Call Logs from backup.
* Restore WiFi Access Points from backup (Pro).
* Restore Bluetooth Data from backup (Pro).
* Restore User Word Dictionary from backup (Pro).
* Restore Browser Data from backup (Pro).
* Restore Nandroid Backup.
* Flash new recovery.
* Fix permissions tool.
Many more features to come in the future!
Planned Features:
* Convert backups between TWRP and CWM.
* Export data from nandroid backup so it can be restored on other devices.
* Restore Home screen data such as wallpaper, launcher, shortcuts, and widgets!
Support thread for this app: http://forum.xda-developers.com/showthread.php?t=2044414
Known Issues: https://docs.google.com/document/d/1wUb … sp=sharing Todo List: https://docs.google.com/document/d/1ncj … sp=sharing
Important info about restoring sms data:
There is a settings in the default Messaging app that deletes older messages from conversations which have more than 200 messages. When restoring1000s of messages this setting can cause a lot of problems because it keeps trying to delete messages when you try to open the conversation. If you are restoring lots of messages, then disable this setting by opening the Preferences of the Messaging app. On some devices it can take a long time to index the new message data. If you get a blank screen or if the phone asks you to “Force Close” or “Wait” when opening the messaging app just press “Wait” and leave the Messaging app running for a while. It will eventually finish and the app will become usable again.
What’s New
Version 1.3.2
* Fixed bug that caused app not to update whenever a nandroid backup was renamed.
* Export MMS pictures has graduated from beta.
* Nandroid manager is no longer listed in apps that can be restored from backup.
https://play.google.com/store/apps/details?id=com.h3r3t1c.bkrestore
Download Instructions: Pro features are unlocked!!
http://ul.to/4u802jyx
Mirror:
http://rapidgator.net/file/07c784a2bddabac6b7ad31b2d8ab7356/Lc6oPrJ7.zip.html
http://www54.zippyshare.com/v/72253701/file.html
Share this article :
Label: Android Apps, Apk Apps
« Prev Movie Next Post » Home