']]}
SwiftKey Cloud Beta v4.2.0.115
Requirements: Android 2.2+
Overview: SwiftKey is the award-winning Android app for smartphones and tablets that will revolutionize the way you type. 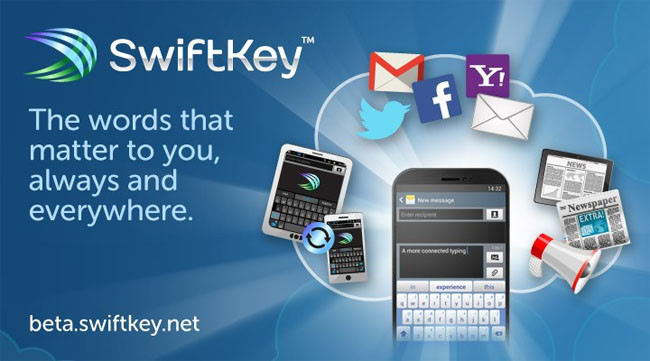 Product Features
Best-selling keyboard app on Android
World’s most accurate autocorrect and next-word prediction
Learns as you type, personalize with Gmail, Twitter, Facebook and blog
Switch seamlessly between tapping and flowing (gesture input)
Type in up to three languages simultaneously
Changes:
Now possible to personalize from a second Gmail account before personalizing from an earlier one has finished
Fix for crash when starting Gmail personalization
Increased responsiveness of Flow predictions (this should reduce the likelihood of the flowed word prediction changing right at the last second)
Handcent and Hangout Emoji entry fixed
Language models no longer backed up via Android back up if you have SwiftKey Cloud backup and sync enabled (this should save on network and battery usage)
Further fixes for crashes in the Cloud preferences
Disabled predictions in Pleco where requested
Removed SwiftKey account details from the Android Settings, as these were confusing when you had multiple installs side-by-side
Known issues:
If you re-add a word that you previously removed from predictions, it will not always get re-added across all your synced devices
The showerhead Emoji in GoSMS messes up input
Spanish inverted ? not visible on plain QWERTY keyboard when Spanish is loaded
Popup accented characters missing after changing layout or language settings
Prediction bar too small in landscape mode
SwiftKey reluctant to replaced a mistyped bottom row character with a space (e.g. ‘Hibthere’ will not get corrected to ‘Hi there’)
http://www.swiftkey.net/
Download Instructions:
Phone version:
http://uploaded.net/file/bbu7nzcy
Mirror:
http://extabit.com/file/279mtljag7pbd
http://www43.zippyshare.com/v/50795965/file.html
Tablet version:
http://uploaded.net/file/9x59olbr
Mirror:
http://extabit.com/file/279mtljag79hl
http://www43.zippyshare.com/v/36133182/file.html
Share this article :
Label: Android Apps, Apk Apps
« Prev Movie Next Post » Home