Shortly after teasing it, Oppo made the N1 Mini official. The company shared some of the phone’s details, but not all, as it will hold an event on June 10 to do just that. 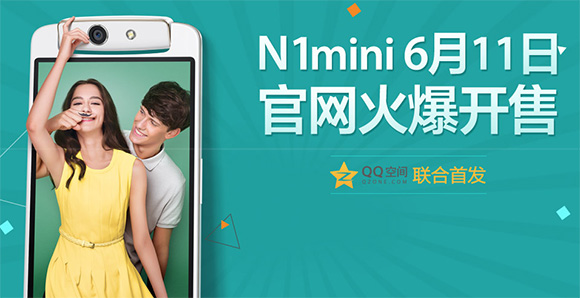 What Oppo shared regarding the N1 Mini is little, but gives a general idea of the phone’s upper mid-range spirit. The Oppo N1 Mini features the same swivel camera as its bigger brother. It’s a 13MP Sony 6-element lens camera with a 1/3.2″ sensor size. The camera features the Super Zoom mode (introduced with the Oppo Find 7), but in the N1 Mini it works at 24MP, not 50MP.

At the front of the Oppo N1 Mini, there’s a 5″ display with a yet unannounced resolution. We guess it’s 1080p, but we’ll wait for Oppo to confirm that. The phone weighs 150 grams, which is somewhat heavy for a 5″ smartphone, but more acceptable when you take into consideration the rotating camera mechanism.

The Oppo N1 Mini runs Android KitKat with color OS 1.4 on top. The phone supports China Mobile’s TD-LTE and alongside its official announcement event on June 11, Oppo will also make the phone available for purchasing.

The phone is rumored to launch with one of two octa-core chipsets – either the MediaTek MT6592 or the Exynos 5422 Octa SoC. We’ll know more on June 10, so stay tuned.