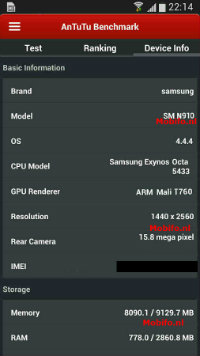 The latest iteration in Samsung’s popular series of phablets, the Note 4, has gone through AnTuTu’s benchmark paces. The image of the test reveals some of the device’s technical specs. Much of it confirms what has already been rumored.

According to the leak, the Note 4 will be packing Android 4.4.4 out of the box, along with a Samsung Exynos 5433 Octa core CPU. There should also be a Snapdragon 805 version of the phone as well, if Samsung’s most recent CPU trends are any indication.

The screen resolution will be set at 1440 x 2560, which will be a nice way to view photos taken by the handset’s 15.8 MP camera. If the rumored size of the screen is true, 5.7”, this would mean that the note 4 packs a ppi of over 500. While it may not be over 9000, this will still make for a pretty gorgeous screen that’s sure to impress. The phone will also pack 16GB of storage space, and even though it is unconfirmed, expect the device to come packed with a microSD card slot (as usual.)

Although the specs haven’t been confirmed by Samsung, we won’t have to wait much longer to know everything there is about the Note 4. Come September 3rd, the Korean tech giant will reveal the phablet in Berlin at IFA.