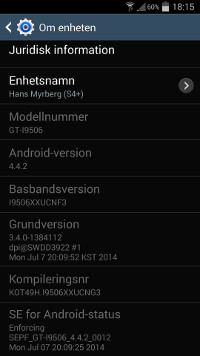 Today the time has finally come for the update to Android 4.4 KitKat to reach the internationally sold Samsung GT-I9506. This, you may remember, is a Galaxy S4 variant that launched last fall sporting the Qualcomm Snapdragon 800 chipset, as opposed to the Snapdragon 600 found in the ‘vanilla’ S4.

Thanks to that SoC’s integrated baseband, the I9506 flavor of the Galaxy S4 also supports Cat.4 LTE, with theoretical peak download speeds up to 150Mbps.

It’s generally been offered in countries where such networks are available, and now its owners can finally see what the big KitKat fuss was all about.

The update is currently rolling out in the Nordic region (Sweden, Finland, Norway), and it’s available over-the-air. After applying the update, you’ll be on software version I9506XXUCNG3.

The rollout should make it to other regions at some point in the future, of course.

And hopefully that won’t take too long, as many months have already passed since the ‘vanilla’ Galaxy S4 got its KitKat update. And the Korean S4 LTE-A, which has the same chipset as the I9506, was actually the first model of this family to get the new software, at the beginning of February. Why it’s taken Samsung this long to port it to the international SKU is quite the mystery.